Go Beyond the Basics.

Take invitations, certificates, letterhead, and commemorative communications to the next level with engraving and other specialty print and finishing processes. 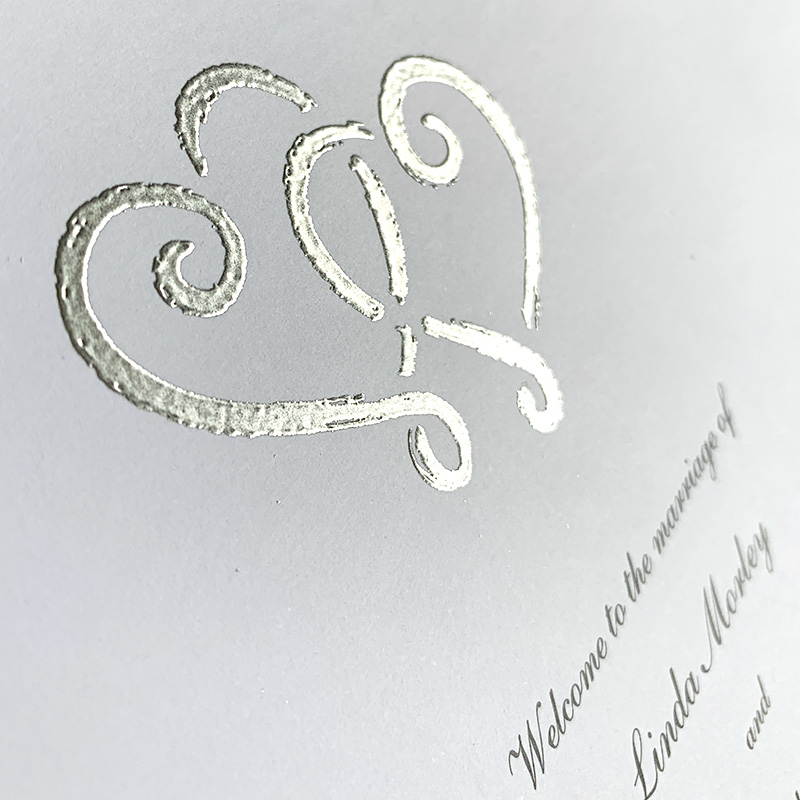 Engraving services from Priority Press add a high-end, traditional touch to your projects. We can reproduce images with intricate details and a wide range of type fonts on all papers. In 2022, Shirley Engraving fully merged into Priority Press, bringing their century of engraving expertise and history to our customers daily.

Engraving is a standout technique, perfect for giving an elegant touch to invitations, stationery, business cards, programs, and certificates.

Thermography is a specialized type of raised-ink printing, often used when clients want a lower-cost alternative to engraving. Our expert printers combine traditional, offset ink print with a heated or “baked” powder to produce a raised texture image. The result is a high-value, low-cost tactile effect that enhances business cards, invitations, certificates, and short-run programs.

Looking for that hand-crafted or retro feel on your print pieces? Letterpress printing is both a visual and tactile experience. The print is created by applying ink to a raised surface, which is then pressed directly against the print substrate to produce a raised image.

This creative style of relief printing is perfect for projects where you want them to have a hand-crafted or retro feel, such as stationery, business cards, programs, and certificates.

Embossing techniques produce a raised image by pressing paper directly to create a tactile effect. The raised and texture area can be combined with colorful inks or foil stamping for a result that is both visually stunning and texturally interesting. Alone or combined with other techniques, embossing can add a special touch to items like stationery, certificates, invitations, and business cards.

Turn your substrate of choice into any shape and size with die-cutting at Priority Press. We offer die-cutting and finishing solutions to meet your project’s exact specifications.

Add a touch of shine to your special projects with foil stamping. This printing technique works by using heated dies to transfer a variety of foils to the surface of your substrate. It can be used alone, or combined with other effects like embossing to produce a textured “seal” effect on items like certificates, programs, and invitations.

Shirley Engraving: Quality Engraving for More than a Century

Founded in 1920, Shirley Engraving built its legacy from the ground up, becoming a nationally-renowned printer of fine printing and stationery. Over a century of operations, the team at Shirley perfected and preserved old-world craftsmanship, all while continually integrating new and exciting print technologies to offer the best possible solutions to their loyal customer base. Their reputation for quality earned them a place in history, with projects as high-profile as engraving invitations for two presidential inaugural balls, in 1953 and again in 2005.