You may know that the world’s biggest children’s museum is right here in central Indiana. But, you may not realize that it has received numerous awards ranging from the Presidential Award given to the nation’s top museum, to coolest museum in the country as written in the New York Times to voting by the American public that designated it the best family museum in USAToday.

The Children’s Museum is dedicated to hands-on, intergenerational learning, which has educators on staff who help create rich and valuable programs and exhibits to benefit people of all ages. One of the things the museum does that few others offer is having a professional actor/interpreter program, which helps bring stories to life in unique ways. On any given day, visitors will meet facilitators who can help explain the context and importance of various things within an exhibit or an actor/interpreter who performs as a character who helps bring these stories to life.

The Museum has more than 130,000 artifacts within its collection that are also used to help promote family learning through the use of real objects and immersive environments. Those artifacts include real fossils from the Jurassic and Cretaceous Periods of dinosaur history, toys, TV and film props, objects that have been to space, and more.

From time to time, the museum also serves up unique opportunities to see incredible collections from other museums around the world. Those who visit before January 5, 2020, can explore Greece in ways they never expected. Right now, in Treasures of Ancient Greece, there are more than 150 ancient Greek artifacts, many of which have never been displayed in the United States. Families can gaze into the eyes of Artemis, wonder at the face of Zeus, race in the first Olympics, and study Greek philosophy. With immersive programming and interactive displays, families can experience ancient Greek life, create art, and discover how the Greeks laid the foundation for western culture. In fact, visitors will notice banners promoting these and other exhibits throughout the museum and on museum property made by Priority Press. 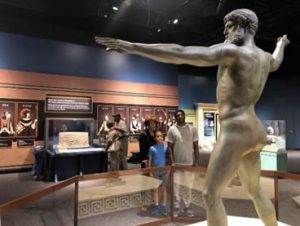 The Children’s Museum of Indianapolis is a nonprofit institution committed to creating extraordinary family learning experiences that transform the lives of children and families across the arts, sciences, and humanities. That extends beyond the walls of the museum as it is also deeply involved in the local community, including the Mid-North Neighborhood Quality of Life Plan, with a goal of improving neighborhood aesthetics, business development, crime and safety, education, housing, senior advocacy, and youth engagement. The Museum also runs The Children’s Museum Neighborhood Club, which provides free memberships to all who live in the surrounding six neighborhoods. It also manages the Old National Bank Mid-North Promise Program, which provides counseling and assistance for its neighbors with regard to furthering their education and / or job training.

For more information about the popular tourist attraction and museum voted number one in the nation by multiple outlets, please visit www.childrensmuseum.org, follow them on Twitter @TCMIndy, Facebook.com/childrensmuseum and YouTube.com/IndyTCM.